A personal piece based on the astonishing—and often peculiar—Burt Lancaster movie: The Swimmer, which was itself based on John Cheever’s brilliant short story for Vanity Fair. 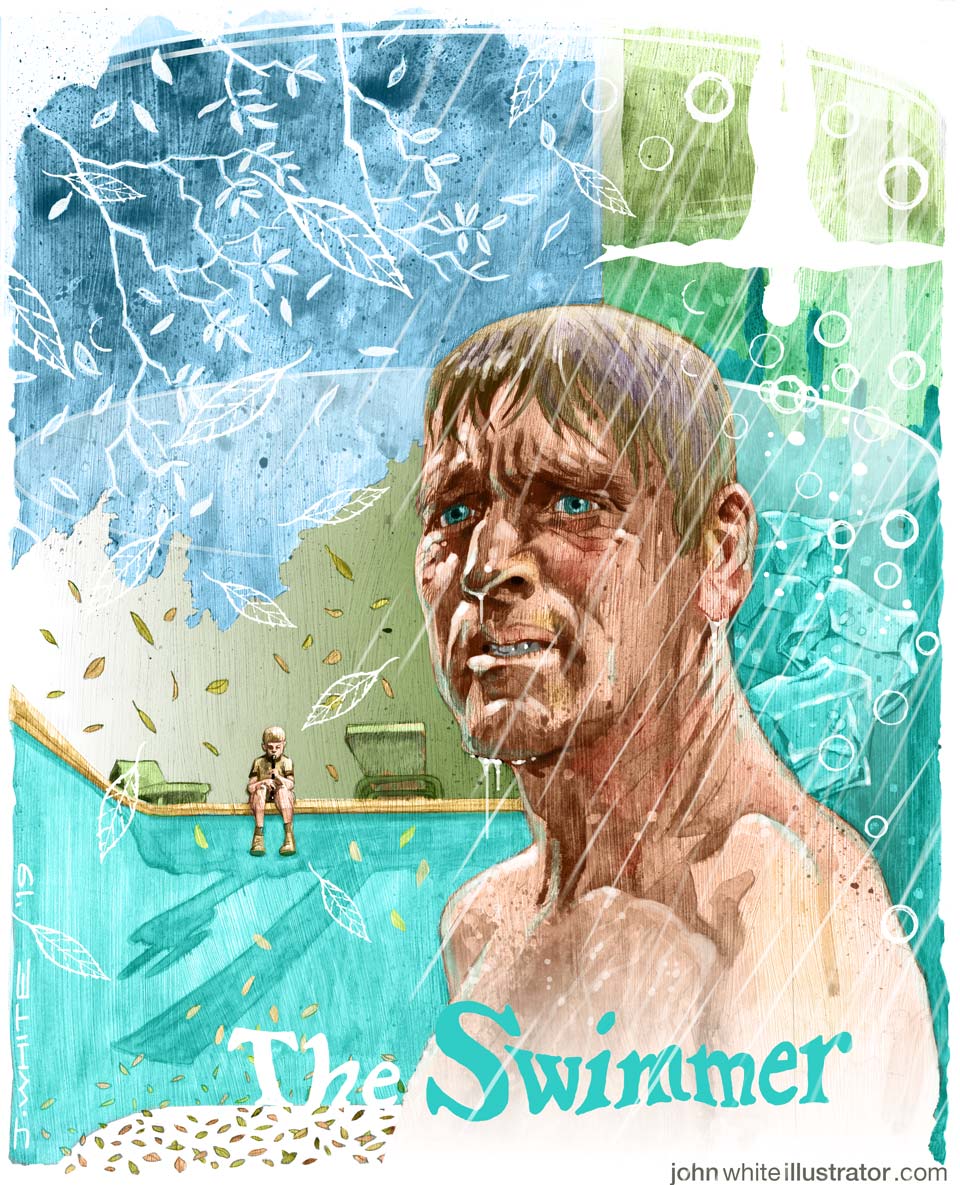 I’ve known about this 1968 film for many years, but only got around to watching it a week ago. My God, it’s just amazing! It really wasn’t what I expected. The film—and the original story upon which it’s based is something of a puzzle (though not a very challenging one), which reveals itself slowly before your eyes. But better still, yet more and more of the underlying back-story reveals itself long after the viewing. Or you think it does. A week later and I’m still having insights flash into my mind about the events—and the dialogue—that occur during the story. Little clues here and there about trees losing their leaves, the time of year, the ages of his children, a possibly fatal accident of a friend, and on and on… It’s as if some of the clues have sneaked into your brain under the radar as you watch what at first seems to be a conventionally structured story, but they pop into your conciousness later and you have these “A ha!” moments.

At the risk of being spoilery, it’s a satisfyingly multilayered depiction of a man’s entire life. He’s neither a hero, nor necessarily a complete villain. And at the tragic end of the film we should perhaps feel that he deserves his fate, but it’s difficult not to feel an absolute gut-punch of emotion for him. He had his faults, but perhaps he was also someone in the wrong situation—or society—who did some questionable things, but bad things also happened to him. Which came first? Who knows.

There are so many fascinating aspects to the movie involving the illusion of The American Dream, class issues, relationships, the pursuit of happiness and what that means.  There’s a deep deep psychological element that deals with delusion, mid-life crisis, nervous breakdown—and the objective perception of reality itself. In the original short story, the latter aspect is shockingly apparent. More than that, the depiction of time itself may not be what it seems. It may not be a normal sequence of events—if they’re happening at all!
It’s a film very much of its time with some very strange moments involving dreamlike slow-motion sequences with lens flares and abrupt camera zooms, but it also seems incredibly ahead of its time. No surprise that it was a commercial flop.

I included a wonderful shot form the film in my illustration, of the boy—Kevin—sitting on the edge of the empty pool. That empty pool is absolutely key to the story and Lancaster’s character’s mind. It also occurred to me that, despite not having read any Greek myths or literature, the story has the feel of a mythical quest with Lancaster at first as the undoubted inspirational hero. When he meets Kevin, the boy is playing a recorder, and reminds me of the mythical Pan. Pan, in classical myth is the shepherd and protector of those who have been abandoned or who no longer feel loved. I’ve seen this before in Pressburger & Powell’s (The Archers) ‘A Matter of Life and Death,’ where David Niven walks up the beach after his plane crashes into the sea, and he sees a naked shepherd boy playing a pipe beside his goats—Greek classical style. He wonders if he’s died and in the next world.

Kevin is also a child who’s mother and father have separated and he rarely sees either of them any more, cared for in a mansion by a maid. He’s abandoned too. I wondered if he might be a mirror of the Protagonist’s own childhood. Kevin complains that he’s never picked to be the team captain in sports, and Ned assures him that he’s better off. That he can be free. “You can be the Captain of your own soul.” I’d better stop, or I’ll completely spoil the movie. I will tell you this: the ending is a shocker—as shocking and unexpected as the ending of the contemporary Planet of the Apes. Don’t let anyone give it away to you before you see the film.

See the trailer of the movie adaptation, below:

Read this brilliant and fascinating essay in the film by Travis Woods, over at Bright Wall/Dark Room a quality online movie magazine: ‘A life in the Day: The Masculine Irreality of The Swimmer.’

How it was made

As I often do, I drew and painted the piece onto primed board with black and (a bit of) white goauche, and scanned it, and worked it further in Photoshop. Most of this was digital colouring but it also allows me to tweak the composition and even the facial likeness quite a lot. I also usually need to digitally adjust the tonal values all over these pieces.
I didn’t do much prep work for this, and kind of wish that I had. More sketching would have made the final piece go more quickly—I think. You can see the rushed sketches below. I was figuring out what to include, what shape, and what orientation for the piece: Landscape—portrait—square? 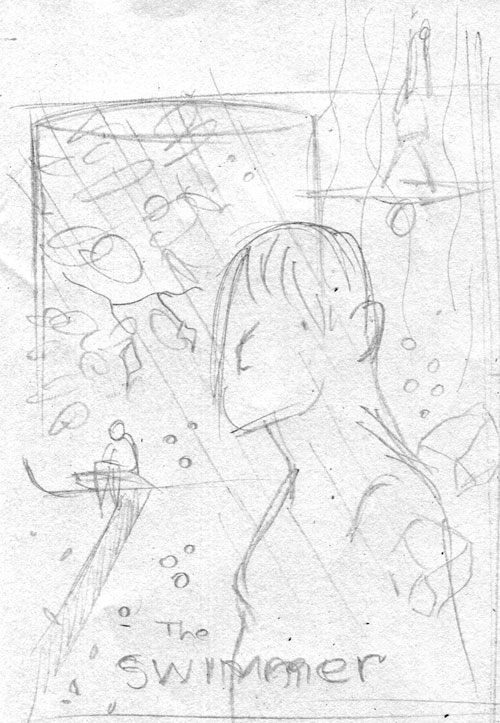 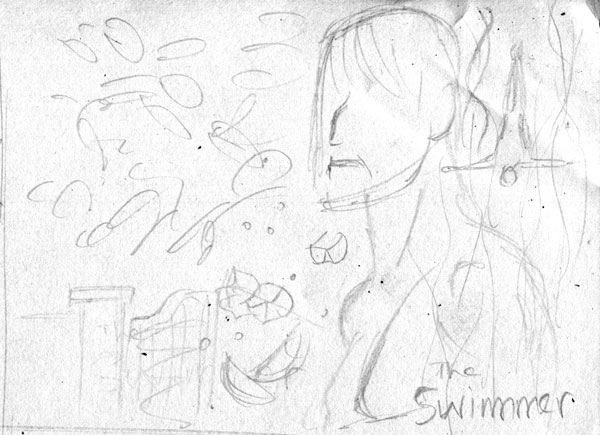 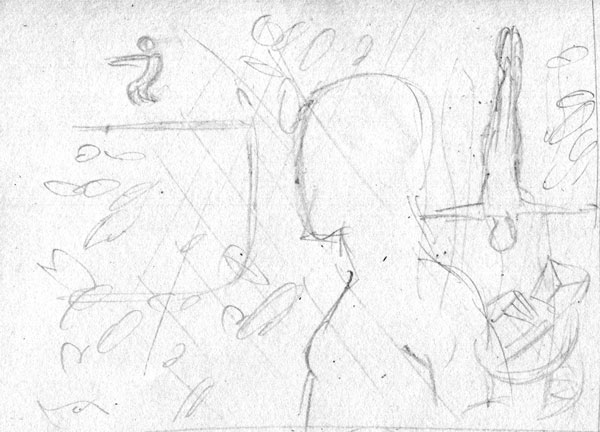 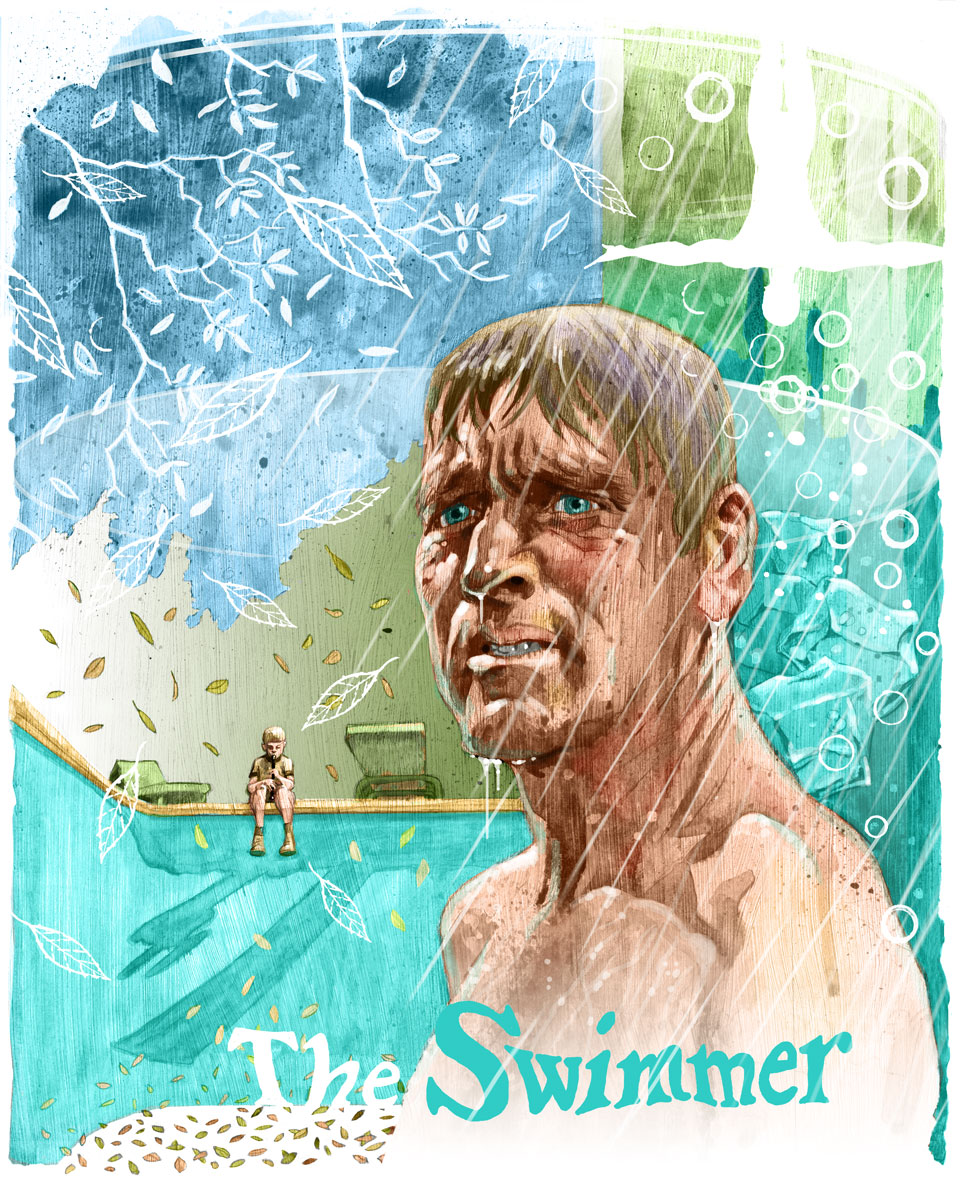