This War illustration was one of my first ever for a newspaper—The Sunday Independent, and it also got me noticed at one of their rivals, the now long-gone Irish Press. 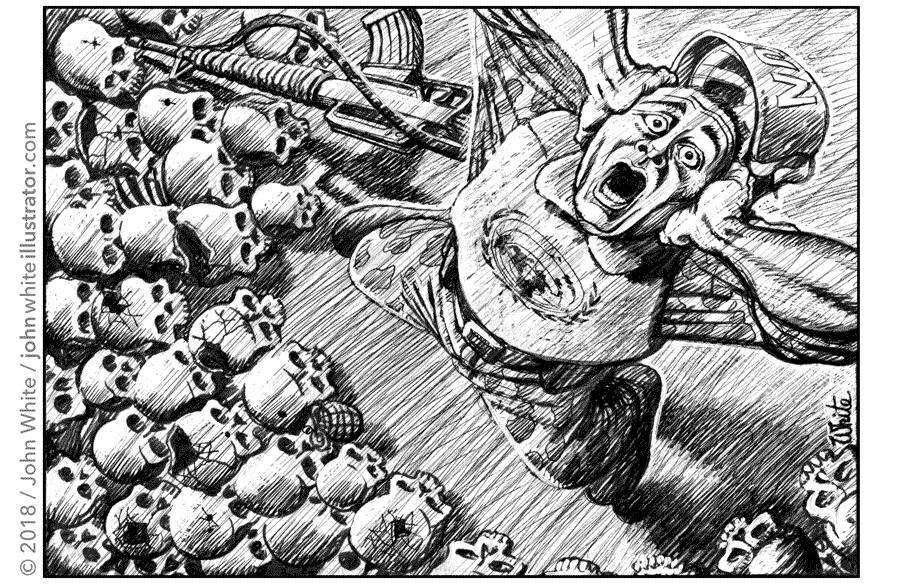 The Horrors of War

In the room where we had religion class in secondary school—which was one of the few classes that I enjoyed, despite being an aetheist—hung that famous WHY? poster, which greatly impressed me. I’m guessing that it provided some inspiration, as did all of the war comics I’d read as a kid. I especially loved the WWI series ‘Charley’s War’ (still do) and Cam Kennedy’s art on the Vietnam war series ‘Fightin’ Mann.’ Willem DaFoe’s iconc death scene in Platoon probably inspired me too.

I started this artwork with vigrously slashed ink lines, which I then worked into. You can see another example of, and a description of the techniques I used on this piece, in another newspaper illustration of mine for a disturbing Ruth Dudley Edwards article».

I’ve also dealt with UN Peacekeepers in a more humourous way in a page of my semi-autobiographical, Award Nominated comic Between * Wars! (detail below)