A weird Illustration for an article by Robert Matthews in The Sunday Independent Newspaper, ‘Are you married to a psychopath?’

‘They are the cold-hearted predators of society, doing as they like, impervious to other people’s feelings, undiagnosed, incurable—and in your life.’—writer, Robert Matthews 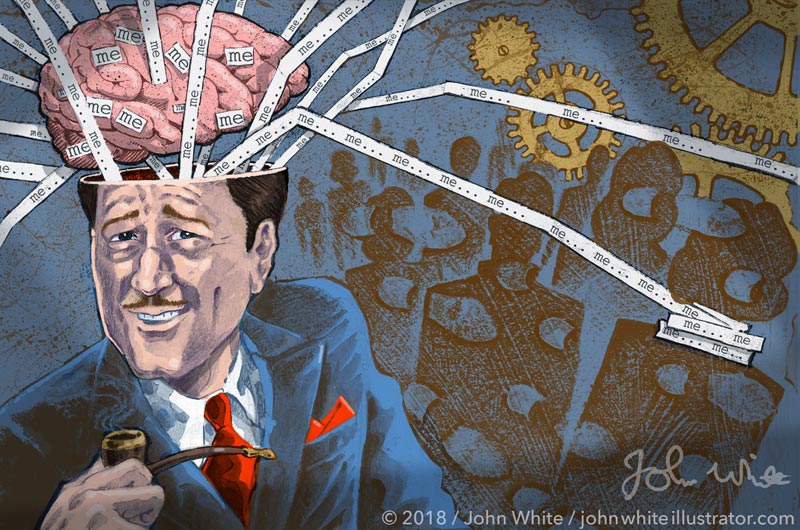 ‘The actor Errol Flynn exhibited of the classic characteristics of the socialised psychopath.’—writer, Robert Matthews

This has always been one of my favourite pieces. It was one of the first times—or maybe even the first—that I took a mixed-media/semi-collage approach. The imagery suggests the inner-working of a psychopathic mind, their self-obsession, their need for everything to be about them all of the time, and how they walk over and control others to get what they want. The others in the piece appear as non-important faceless entities, whereas the controlling narcissistic psychopath himself is prominently to the front looking dashing and handsome—and even charming—and unaware of or uncaring about the suffering he’s causing to others. His personality defect is controlling and strangling them.

I wanted it to have a disturbing, chaotic and nightmarish quality to it. It occurs to me that it might have been slightly influenced by the film SE7EN, in which there’s a lot of copy-paste imagery in the opening titles. But I was also interested in pushing my methods and style a bit further. I’d begun illustrating for the press with purely drawn pieces in strong black line and fine black hatching on white—which always printed well despite the limitations of newsprint. But I began to introduce tonal work in watercolour and black polychromo pencil.

I didn’t use any found materials in this, but made every element from scratch. The base material was white gessoed board, which gave it some texture. I drew and painted Errol Flynn and the brain on paper and cut them out. The characters behind were drawn onto the board with the waxy black pencil. And the ‘me me me’ ticker tape was typed up on the PC, printed out, trimmed and stuck on.